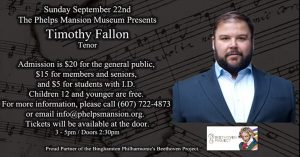 On Sunday, September 22nd at 3 p.m., Tenor Timothy Fallon will perform at the Phelps Mansion Museum during its Chamber Concert Series at 191 Court Street in Binghamton. Timothy will be accompanied by T.B.A. on the piano. Tickets are $20 general admission $15 members and seniors, Students $5.00 and children 13 and under FREE. Please note tickets are available at the door or by calling 607-722-4873.

Timothy Fallon, tenor has been hailed by the New York Times as possessing an “elegant sense of phrasing and luminous tone with his sure-handed
control of timbre, from velvety pianissimos to bright confident high notes.” Mr. Fallon devotes time to both the operatic and concert stages. This
January Mr. Fallon collaborating with pianist, Ammiel Bushakevitz released an album of Franz Liszt Songs, LISZT 15 Songs with the Swedish label BIS
Records.

Other highlights of 2017 include making his London recital debut at Wigmore Hall as well as
making his Dutch National Opera debut in Moritz Egger’s Caliban, a world premiere in the
Opera Forward Festival in Amsterdam. Recent concert work has included performances of B
minor Mass in Helsinki, Finland as well as collaborating with the Israeli Schubertiade giving
recitals throughout Israel. Recent opera performances were Ferrando in Mozart’s Cosi fan tutte
at the Grachten Festival in Amsterdam, The Netherlands. He also collaborated with the Munich
based ensemble, I Virtuosi ambulanti in Wertheriade, a salon opera devised for him of seldom
performed pieces from the bel canto era.
Performances of Wertheriade were presented at the Baroque Theatre of Hanau Wilhelmsbad,
Schlosskirche Bad Homburg for der Hohe, Schloss Esterhazy in Eisenstadt, Austria and in
Madrid, Spain at the Auditorio Nacional. From 2007-2013 he was the house lyric tenor of the
Oper Leipzig in Germany. There, his noted roles included Narciso in Rossini’s Il turco in Italia,
Count Almaviva in Il barbiere di Siviglia, Belmonte in Die Entführung aus dem Serail, Der Sänger
in Schoenberg’s Von heute auf morgen. Other performances include the title role in
Offenbach’s Orphee aux enfers and Belfiore in Mozart’s La finta giardiniera and Tonio in La fille
du regiment.
In the summer of 2013 he performed Baroncelli in Wagner’s Rienzi under Christian Thielemann
for the Bayreuther Festspiele. Recent concert appearances include a Liederabend at the
Rudolphe Kempe Society in Stratford-Upon-Avon, United Kingdom a Carmina Burana with the
Dortmund Philharmoniker in Dortmund, Germany. Marilyne Horne, esteemed American mezzosoprano
is a mentor of his and he has sung in recitals at Carnegie Hall for the Marilyn Horne
Song Celebration. Other concerts have included St. Matthew Passion of J.S. Bach with the
Danish National Symphony Orchestra in Copenhagen, Denmark as well as the world premieres
of Sven David Sandström’s St. Matthew Passion and Messiah at the Berlin Philharmonic with
consecutive concerts in Stockholm and Uppsala, Sweden.
He has also collaborated with the 900-year old Thomanerchor of Leipzig on tour in Hong Kong
and at the St. Thomas Church of Leipzig. He has performed internationally in some of the
world’s esteemed concert halls with such conductors as Helmut Rilling, Herbert Blomstedt,
Marin Alsop and Masaaki Suzuki. Mr. Fallon was born in Binghamton, New York. He holds a B.A.
in Music from Westminster Choir College, a M.M. in Opera from Binghamton University and an
Artist Diploma from the Juilliard School.

This program is made possible in part by a grant from the United Cultural Fund, a program of the Broome County Arts Council, and with public funds from the Chenango Art’s Council’s Decentralization Program, a re-grant program of the NYS Council on the Arts, with support from Governor Cuomo and the NYS Legislature. Additional support for Broome County provided by the Stewart W. & Willma C. Hoyt Foundation. 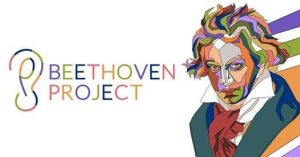